So what will you do as the very last speaker in the ‘something different track’ on the Tweakers Developers Summit? The energy is low, dinner is almost served, beer is served cold, the crowd is tired….

Crafting some powerful questions and let’s go. No powerpoint attached. Around forty attendees joined the masterclass ‘Scaling agile using Feature teams’. From my point of view everyone was having a wonderful experience.

Based on the powerful questions (see below) the crowd cooperated in pairs and later in teams of four what their best experiences are. After each round the teams presented their topics to the whole group and placed their placeholders on sheets to evaluate later.

At the end the masterclass each individual could plot his or her specific route to start exploring ‘Scaling agile using Feature teams’. What might work for one, might not work for someone else. So there is no right or wrong approach.

A big applause for the crowd. You were awesome and we’ve made a lot of noise. Twice we were being asked to lower the volume because in other rooms we were heared too 🙂

Hopefully ’till next year – ciao, ciao 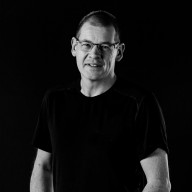